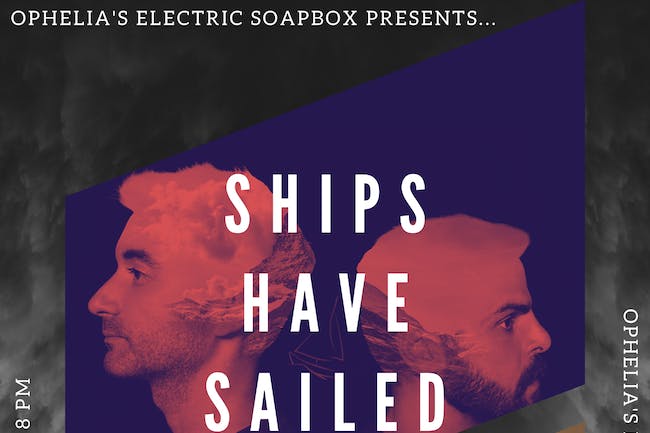 Ships Have Sailed is the brainchild of vocalist/guitarist Will Carpenter. The band materialized in the waning days of his previous project –a band he had been an integral part of ever since moving to Los Angeles. His decision to individually focus on new music again was initially daunting, but the risk proved to be invigorating and refreshing. The music is uplifting and buoyant. The lyrics are thoughtful and conscientious. The sound is sincere indie rock with an unabashed pop structure. And after initially sharing it with fellow musicians, Carpenter recruited a lineup that now permanently includes drummer Art Andranikyan.

Moodswings (2015) is a cohesive release with epic ambitions. Every track emotes an unrestrained desire to be heard and enjoyed in the heart. With crescendoing ballads (“Drive”) and indie rock alacrity (“Boomerang”), there’s a uniform sense of sanguine sensibility. Certain tracks were remixed with an electronic edge by DJs (such as Dimond Saints and Mike Vincent) and collected onto the EP Re: MIX (2015). The following year, the band recorded acoustic versions of select songs and released them on an EP, Whispers (2016), along with two new originals. Praise of their next single, “Up” (2017), encouraged the band to tour overseas in the U.K. and Ireland. Their follow-up single, “Let’s Just Dance” (2018), was a superb collaborative effort with songwriter Robert Gillies (X Ambassadors, Bebe Rexha) and producer Wally Gagel (Best Coast, Family of the Year) of recording studio WAX LTD.

Carpenter describes the band’s moniker not as a pessimistic reference to the renowned idiom “that ship has sailed,” but instead a fresh, positive perspective on the unexpected outcomes of unforeseen circumstances. It’s an adage that can be applied to his own life of growing up in poverty in rural Vermont and being kicked out of his home as a teenager. He made ends meet by working as a dishwasher and eventually put himself through college as a security guard on the graveyard shift. And it’s from this period of his life that Carpenter recently reflected on to draw introspective inspiration. Thus, the band’s next series of singles, which began with “Escape” in February, “Stay” in June and continues with their latest release “Skin” (Oct. 11th) express a deeper level of sentiment than ever before. They express a desire to resonate with people who have had similar experiences and emotions.

“Has anyone ever told you that you need to grow a thicker skin?” asks Carpenter “I can’t even count how many times people have told me that. But they’re essentially telling you to numb your feelings, and I think that our feelings and emotions are the essence of our humanity. The music I create wouldn’t be honest if I didn’t lean into my emotions when I’m writing, and so ‘Skin’ is my way of expressing that I’m content with feeling as much as I do…even if it hurts sometimes.”