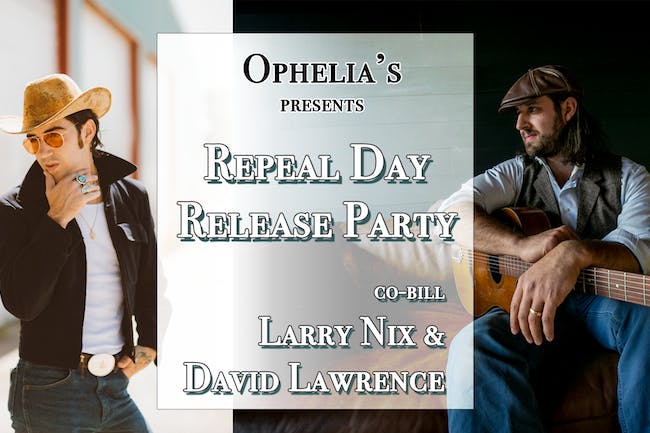 iCal
Google
Join Larry Nix and David Lawrence to celebrate the End of Prohibition and the Release of New music!

David Lawrence is presenting his debut solo album 'Give it to the Stones'. Stripped down to just guitar and vocals the album features David's unique song-writing approach and driving guitar playing. Best known for nationally touring Gypsy Jazz band 'LAPOMPE', his original repertoire spans from vintage swing to down home blues to folk ballads and features his unique style of Gypsy infused blues guitar playing. Combining a vintage sound with unique touch his originals have taken on the character of well worn shoes. Soulful lyrics combined with authentic guitar playing that take you on journey to a new place while never leaving home.

For this special Release party David is bringing his trio with Gary Sloan on upright bass, and Doug Bainbridge on Drums.

Larry Nix is a crooning Americana/country/western musician who made his professional debut in 2019 with his LP release “Hardly Haggard.” Nix is known for bringing his soulful style and voice to every performance, leaving new fans in his wake. Be on the lookout for the pop-gospel song, “Broadway Cowboy,” releasing in conjunction with the October ’19 line of limited edition hats from Goorin Bros. Hat Company. Larry Nix is a Coastal Bend recording artist, and self-proclaimed billionaire of love.

Join Larry Nix and David Lawrence to celebrate the End of Prohibition and the Release of New music! The first 100 ticket holders will receive a copy of David Lawrence's new album.