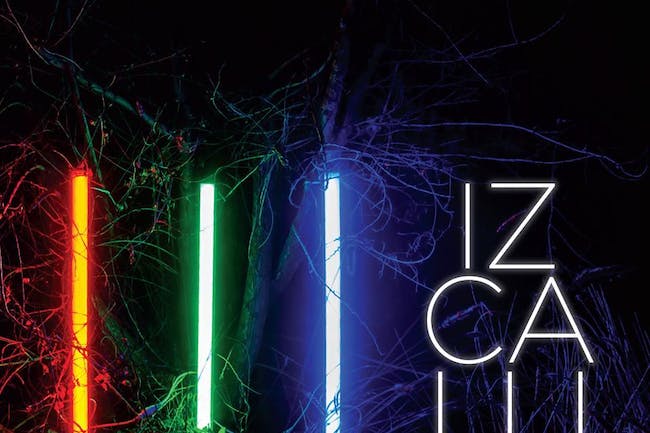 It used to be Spanish rock equaled covering Norteamericano bands. That’s how it was when Miguel and Brenda Avina’s dad was shredding metal in the 80s in Mexico, and that’s what Rock En Tu Idioma meant: you translated the lyrics and did songs by Whitesnake or The Cure.

Miguel didn’t want to do that when he started Izcalli in 2005 with an acoustic guitar and dual hand-percussionists Luis Galaviz and Raul Chavelas. Under the banner of RETI=Rock En Tu Idioma, he wanted to do original Rock in Spanish — or in English, too, if he felt like it — and he had a vision: that there was a need for the kind of music he wanted to make, with a swath of influences ranging from flamenco to Zeppelin, and a community of musicians just waiting to unite.

The idea caught hold and scored the young band an opening gig with Spanish act BEBE; playing at the Gothic before that sold-out crowd, Miguel had another vision: "Hay que Rock Harder". A Les Paul replaced the acoustic, Galaviz switched from djembe to the kit, and Miguel recruited his sister Brenda on bass.

RETI rounded up nine other bands and released a compilation — Rock en las Rocas Vol. 1, featuring early iZCALLi tunes “Me Siento Solo” and “Que Debe Fallar (Marybel) — the band’s first official release. A proper LP followed in Pintas en Pasteles, which replaced Galaviz with Madafra’s Mario Gonzales on drums. The band went on tour not long after with Hombres G, and has gigged with a slew of nationally renowned artists, such as Jaguares, Los Enanitos Verdes and Julieta Venegas, Molotov, Bomba Estereo and Elefante just to name a few.

iZCALLi's sound drilled through the folk-based rock of Pintas and into deeper beds of Alt-rock, Indie, Latin sounds and Ska for Despiertame, the band’s second LP. The same year, RETI launched Rock de Mayo, a sonic Cinco de Mayo celebration iZCALLi has curated ever since, bringing acts like Eldren and the Photo Atlas to a crossover crowd — the same crossover iZCALLi has been reaching at coveted spots in festivals like Westword Music Showcase and the Underground Music Showcase several years running and recently by opening shows for Devotchka, The Stone Foxes, Night Riots and In the Whale.

iZCALLi continues to grow, bringing in Luiggy Ramirez on drums, and spreading the message via collaboration with Fort Collin’s Spokesbuzz, a nonprofit dedicated to the goal of transforming the Front Range into world-class music scene, plus multiple appearances at SXSW. The band also celebrated its 10th anniversary in August with a sold-out show at the Walnut Room and the release of III, a deeper exploration of the same roots that made Despiertame grow. It’s a big deal, but it’s also just another step in iZCALLi's never-ceasing mission to bring you Rock En Tu Idioma — and an ever-expanding definition of what Rock En Tu Idioma can be.